I recently found myself driving through the streets of Harare, only to see enormously long queues outside all of the retail banks in the capital.

Some banks were issuing numbers to those standing in the queue, a process which would shortlist them for the opportunity to access the banks’ ATM or teller that day. At other banks where no number system was in place, people would simply wait patiently until the days’ physical cash allocation would run out.

For anyone who has followed the events that have unfolded in Zimbabwe over the last two decades, you will know that the people of this country, once the breadbasket of Africa, have been riding what can only be described as an economic rollercoaster.

Unfortunately the ride is not over yet. With new concerns over shortages, a continued cash supply issue and decisions imminently taking place over plans to bolster the economy, Zimbabwe is entering a new era of uncertainty, or perhaps opportunity. 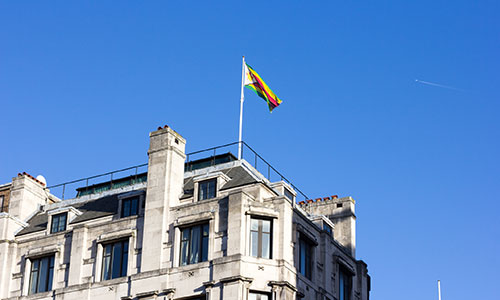 For those that have not been following so closely, a brief summary of the last two decades in the country’s history looks as follows.

By the rapid fire account of the economic and currency woes faced by the Zimbabwean people shown above, it is not difficult to see the challenges presenting this country.

The latest events in the timeline of Zimbabwe’s financial history have meant that due to the limited access to cash at ATM’s, many Zimbabweans who receive salaries or pensions in the form of digital currency have needed to find new ways to access their funds, turning to tools like their bank cards, EcoCash and the illegal black market. Unfortunately the use of these alternatives has not been smooth sailing either.

EcoCash, a product of EcoNet Wireless, Zimbabwe’s largest MNO (Mobile Network Operator) has seen large growth and extensive use during this time, but it has had issues of its own. When trying to “cash-out”, customers using the EcoCash platform found themselves being charged a premium by the network of agents who run the platform on the ground, in addition to the standard transaction fee. Some argued that this was a natural market force in an economy where physical cash comes at a premium. This is something that EcoCash did not looked upon with favour due to the long-term brand damage it could cause and the potential sentiment that would follow, were the situation to turn around at some point in Zimbabwe. To this end, EcoCash disconnected agents found to be doing this.

Similarly, many Zimbabweans from all walks of life have been making use of the black market where currency can be traded and obtained with far greater ease than in the banking system. This unfortunately also carries premium charges hurting the man in the street considerably, apart from being illegal and punishable by law.

To compound the issue, a new transaction tax on all electronic transaction was introduced in October 2018, increasing the transaction tax from 5 cents per transaction to 2 cents per Dollar. This new tax was introduced by the newly appointed technocrat Finance and Economic Development Minister Mthuli Ncube in efforts to widen the tax base. This coming as a result of electronic transaction having skyrocketed in popularity as a result of currency shortages, accounting for 96% of the transaction taking place in the country. This move is set to earn the country $2.5bn over the year but is likely to further deter citizens from using their cards and prefer to try and get their hands on physical currency, simply exacerbating the issue.

What we take from the above is that in the domestic economy, although currency shortages are being felt heavily, life goes on at a premium for those who can afford it. For those that cannot, the struggle simple worsens.

In a nation that has been continually disappointed by its economy and banking system as a whole, the hunger for cash shown by the people of Zimbabwe is not unexpected. With limited access to funds and bank balances which dwindle overnight as currency fluctuations take effect, it is no wonder that most Zimbabweans want their money in cold, hard, cash, ideally US Dollars kept under their pillows. It is the story of a people who have lost all faith in the ability of the financial institution to protect their wealth, a people who have been burnt too many times before to continue to trust.

The domestic economy aside, the real structural issue facing Zimbabwe is its ability to reduce its trade deficit, encourage FDI, increase internal production, export goods and increase the flow of foreign currency in the right direction.

The harsh reality Zimbabwe is facing on this front is that for it to once again rise up over the long term it needs to be able to trade and importantly export product to foreign customers.

Let us contextualise the issue Zimbabwe is facing on this front in the form of an example. Consider the situation of a large agricultural business with customers outside of Zimbabwean borders paying in USD. This sounds fine you are probably thinking? Where is the issue?

For this provider to be able to produce his crop, he has to have access to foreign currency to purchase his inputs, which invariably come from outside the borders of Zimbabwe. Without this, he is not able to farm, produce or sell any product, meaning that the economy is stopped right in its tracks without even being given a chance to get off the ground.

Although efforts are being made to mobilise loans and financing in hard currency to enable this process, the contributions are relatively too small and the lead times too long.

It is for this reason that we are one again seeing shortages take hold in Zimbabwe. As a net importer, Zimbabwe is heavily reliant on imports to sustain its economy. Without the ability to generate the currency to be able to pay for these imports, shortages of fuel, cement, medicine and food once again have begun to raise their ugly head. To this end, showing the severity of the impending situation, the government of Zimbabwe has lifted import bans on certain products, originally put in place to protect industries within the countries borders. This has been carried out in an attempt to encourage Zimbabweans to source these supplies from its neighbours and assist in averting severe shortages.

“Zim Money Explained” : A visual representation in the form of cows and goats as to how Zimbabwe’s currency woes and valuation has played out in the form of the US Dollar, The Bond Note and RTGS, which is largely carried out over EcoCash.

The Affect on Innovation and a Digital Future

Off the back of the above points, it is entirely clear to see why Zimbabweans are such a cash hungry nation. It is a real shame in fact, as in the mind of Zimbabweans, physical currency is what is seen as freedom. This is based on the fact that they have been forced into using digital “grudge” alternatives which come at a premium. Worse still, the digital alternatives are where they have been burnt, where their money has depreciated in the blink of an eye with no mechanism to extract it in order to retain its value.

When the rest of the world is looking to digital currency’s and lightening up on the need to work with physical cash, Zimbabwe seems to be looking in completely the opposite direction. Consider the benefits of moving to a cashless society and the unnecessary expenses incurred in keeping physical cash in circulation. What effect do we imagine that this will have on the countries ability to innovate and grow in the digital domain over the medium to long term?

It is simple examples like eCommerce which will be deterred, based on the fact that plastic money is a key driver of this channel. A form of payment being taxed more so than ever. It is a dichotomy playing out in the worst way possible. Solutions, which can be offered through digital if managed correctly, are being vilified before they even have the opportunity to show their potential.

Will there be a New Dawn for Zimbabwe?

Zimbabwe’s senior figures are believed to be charting a course to financial freedom, citing 3 options as a means to unwind the country from the strings currently stifling its economy in terms of cash shortages. The first options includes adopting the USD, removing the bond notes from circulation and liberalising exchange controls. The second includes joining the Rand Monetary Area (RMA) and adopting the Rand, the currency of South Africa, its largest trading partner. The third includes adopting a new Zim Dollar, one which is backed by adequate foreign reserves and stronger macroeconomic conditions.

Either three considered, Zimbabwe needs to re-boot its production by securing foreign currency and protecting this allocation to allow its producers to pay for their imports, generate exportable value-added products, receive payment in a hard currency and get the economy moving. Which of the three options come to pass, we shall need to wait and see – I really do hope though that a country with so much potential is able to once again soar as it once did. A country with such strong people, with such positive attitudes owes it to its citizens far and wide to create an environment to which its diaspora would excitedly return to repatriate their skills, value and energy.